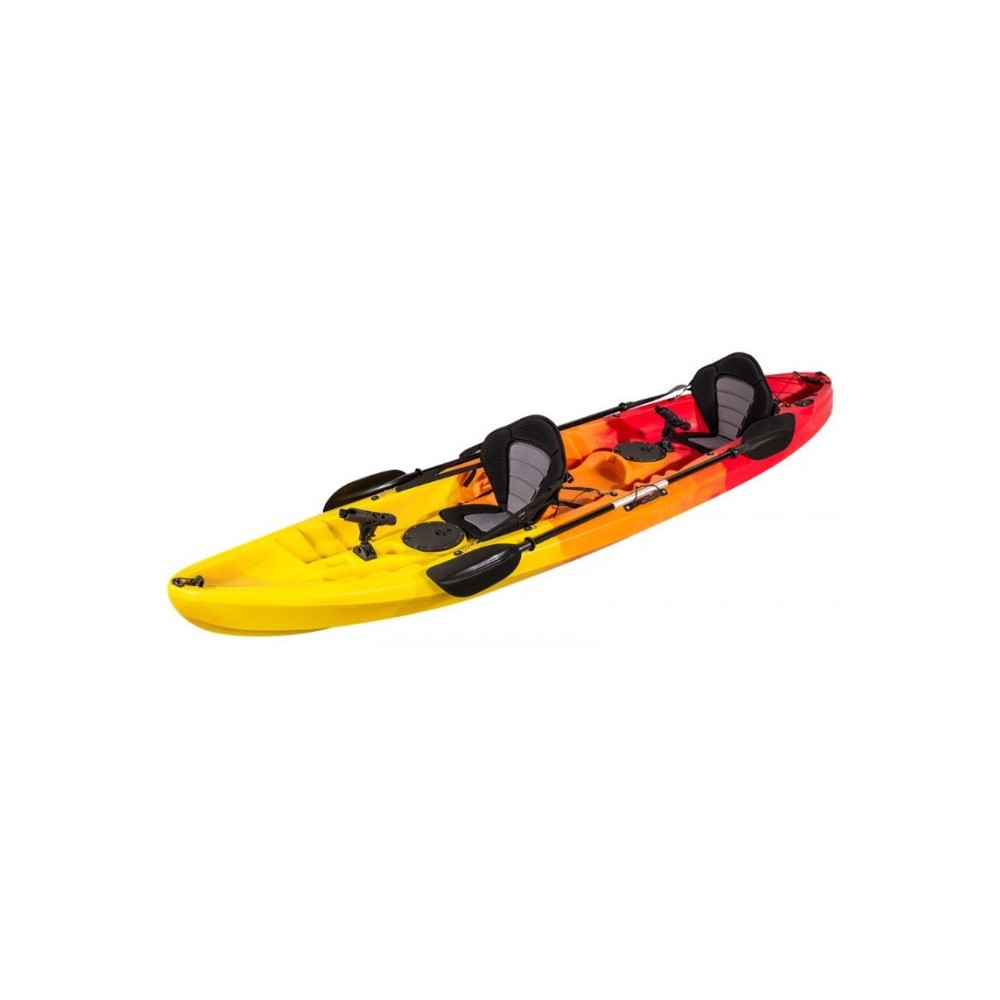 Very versatile 2 + 1 fishing kayak that can be used as a double fishing kayak and as a triple recreational kayak. At 86 cm wide it has unmatched stability and comfort. Fully equipped with seats, shovels and rod holders.

The OCEANUS P double fishing kayak is a self-emptying kayak or sit on top kayak where stability predominates thanks to its 86 cm width, which also makes it a fishing kayak with a large load capacity of 250kg and comfortable at the time kayak fishing.

Although it is a kayak with fewer features than the CASTOR P, its success lies in that it can be used as a double fishing kayak and also as a recreational kayak for the whole family thanks to its 3 places, 2 adults + 1 child. Being a very versatile fishing and recreational kayak that can be used in different situations. Its central seat allows this kayak to also be used as an individual fishing kayak.

Advice! If you are looking for a double fishing kayak your option should be the DOUBLE CASTOR P KAYAK model with a price very similar to the OCEANUS P it is a somewhat faster kayak that will allow you to cover a larger fishing surface, more comfortable for 2 people, It has a larger luggage rack and has a console to house the different fishing tackle. However, if in addition to fishing in a kayak you use the kayak for recreation with the family, the OCEANUS P will be the best option.

The OCEANUS P triple sit on top kayak is our best selling triple kayak among families with children who want a fishing kayak for occasional outings as well as a kayak with which to enjoy with the whole family where stability is most important. , comfort and safety.

2 x Deluxe seats made of high-density EVA rubber for perfect comfort and protection of the lower back.

2 x 25cm diameter waterproof tubs where you can store the objects you want to keep safe from water such as cameras, watches, mobiles, etc.

2 x Fixed rod holders that will allow you to continue rowing at the same time that you are fishing.

2 x 360º Directional Rods with which you can orient the rod in the direction you want.

4 x Holding handles to transport the kayak, two on the sides and two on the ends

Screw cap for evacuation of water from the interior kayak.

Kayak rack made of high-density EVA rubber that will allow you to easily transport any kayak, canoe, surfboard or paddle surf on top of the vehicle. Assembles and dismounts in less than 1 minute.

Easy to use Transport Cart. Its aluminum bars are inserted into the self-emptying holes avoiding the use of fastening straps. Puncture-resistant PU wheels since they do not have an inner tube.

Aluminum Raised Seat. Increase comfort by using an aluminum booster seat in which you can sit in a much more comfortable way.

If you want a kayak with a large load capacity to fish in company and that due to its stability will allow you to practice different types of fishing from a kayak, but you also want to use it occasionally as a kayak for the family, this kayak is your option, since its 2 + 1 places will allow you to use it as a double fishing kayak, as a triple ride kayak with capacity for two adults and one child. Its central seat makes it possible for this kayak to also be used for fishing individually, somewhat more complicated in double fishing kayuaks that do not have a central seat. It is undoubtedly a very versatile sit on top kayak that you can use in very different situations both at sea and in lakes or rivers.